All pictures on this page are contributions by Dr. Bernd Frassek.

Fig. 1: Drawing of a Great Circle on a Sphere 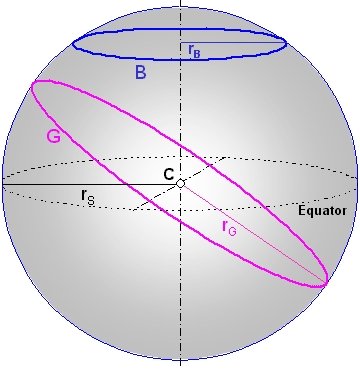 A great circle is a special circle at the surface of a sphere (for example of a planet or of the sky). Figure 1 shows great circle G and latitude circle B on a sphere. You can recognize a great circle by any of the following attributes:

A great circle provides the shortest route if you travel at a fixed speed compared to the ground, and also (approximately) if your speed, though not fixed, is always much smaller than the rotation speed of the sphere at its equator. This does not hold, for example, for things that orbit around the Earth outside the atmosphere.

Suppose that you want to draw the shortest route on a map between a city P₁ and a far-away other city P₂, and you know the geographical longitude and latitude of both cities. Then, you can calculate the coordinates of points on that route as follows: 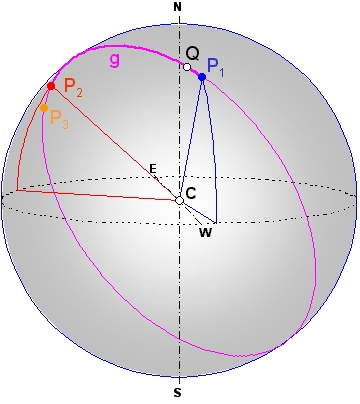 There is an alternative for formula \ref{eq:positie}, which does not require the calculation of the position of point 3:

4. A Great Circle in a Certain Direction Through a Known Point

Suppose you want to know where you go if you start from a particular town in a particular direction and keep going straight. We assume that you travel at a speed that is much smaller than the rotation speed of the Earth along the equator. You'll then travel along a great circle. You can calculate the coordinates of points along the route as follows:

5. The Northernmost and Southernmost Point of a Great Circle

Fig. 5: Northernmost and Southernmost Point on a Great Circle 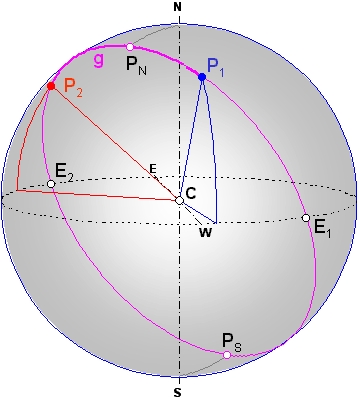 If you travel from Amsterdam (P₁ in Figure 5) to San Francisco (P₂) or the other way around, then you first go towards the north for a while, and then towards the south for a while. All great circles except for the equator have a northernmost point (PN) and a southernmost point (PS). You can calculate them as follows, if you have points P₁ and P₃ separated by 90° along the great circle (for example, by using formula \ref{eq:punt3}):

Calculate the angular distance of the first city P₁ from the first special (northernmost or southernmost) point:

The angular distance of the second special point is 180° greater (or less, that is the same thing on a circle):

6. Distance from a Great Circle

The short answer is that that distance \(α\) is determined by

Here is the same answer, but with more explanation. The vectors \(\hat{P}_1\), \(\hat{P}_2\), and \(\hat{Q}\) point from the center of the sphere to the points P₁, P₂, and Q. Their Cartesian coordinates can be found from their polar coordinates using Eq. \eqref{eq:naarcartesisch}.

and the vector cross product is equal to

For example, how far from the great circle through Amsterdam (P₁) and San Francisco (P₂) is the airport of Reykjavik in Iceland (Q, at 64.13° north lattiude and 21.94° west longitude)?

We find that \(z_S\sin(α) \gt 0\), so Reykjavik is to the north of the great circle through Amsterdam and San Francisco, at a distance of 0.18°.

7. The Equator Points of a Great Circle

Every great circle except for the equator intersects the equator in two points, called E_1 and E_2 in Figure 5. The longitudes of those points are 90° to the east and west of the northernmost and southernmost points of the great circle, of which the calculation is explained above.

For example, the great circle through Amsterdam and San Francisco crosses the equator at longitudes 38.3537° and −141.64627°, in Kenya and the Pacific Ocean, respectively.

8. Great Circle on a Topographic Map 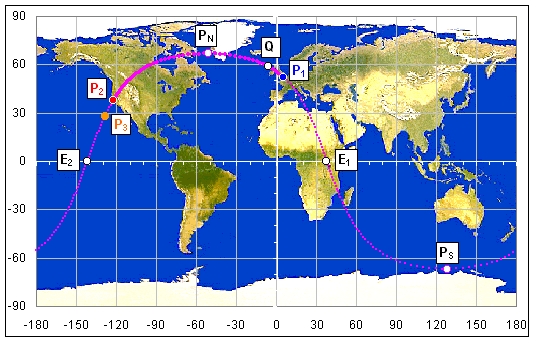 Figure 6 shows all relevant points and the relevant great circle from the above examples on a world map. This type of world map is often used but is not very suitable for finding the shortest route (part of a great circle) between two points on Earth, because most great circles appear crooked on such maps, just like the great circle that is shown.